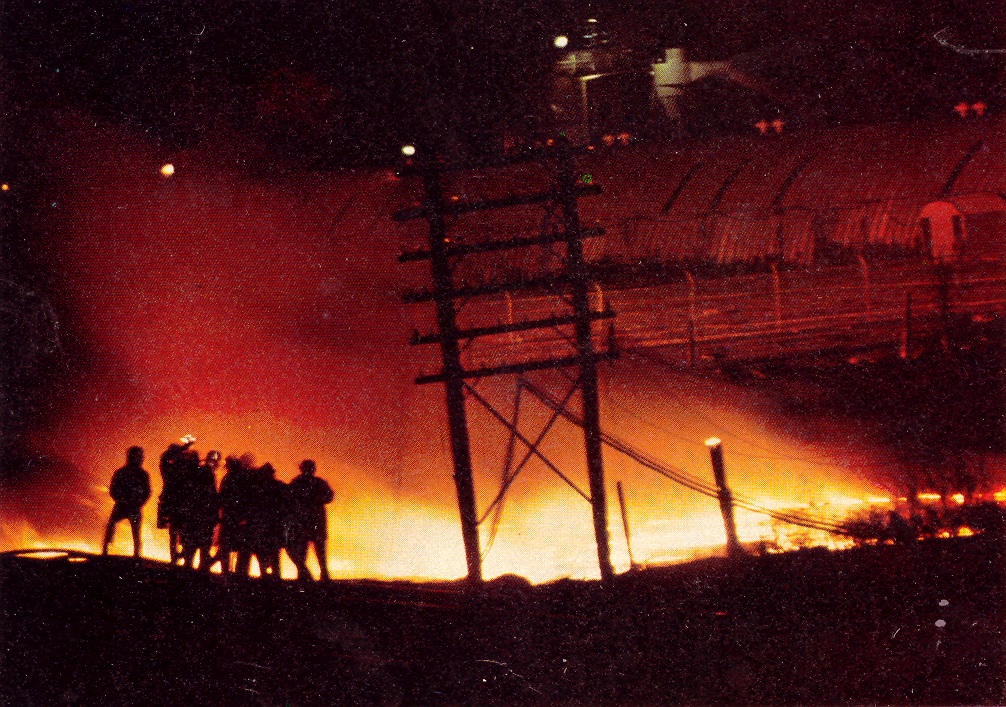 On the 10th of November 1979, the 33rd car of the CP Rail freight train derailed while passing through the recently incorporated City of Mississauga. An issue in the bearing of the wheels caused a wheelset to overheat and fall apart which subsequently caused the massive derailment and multiple explosions of the explosive chemical contents of the railcars. As a result, the incident included massive liquid-propane explosions, as well as styrene, toluene, caustic soda, and chlorine spills that made the situation chemically unpredictable and highly dangerous. Immediately upon catching a glimpse of the 5000-foot-high Boiling Liquid Expanding Vapour Explosion (BLEVE), firefighters around Mississauga rushed from their quiet homes to the chaos and mayhem of the derailment and ensuing fire located at Mavis Road between Burnhamthorpe and Dundas. 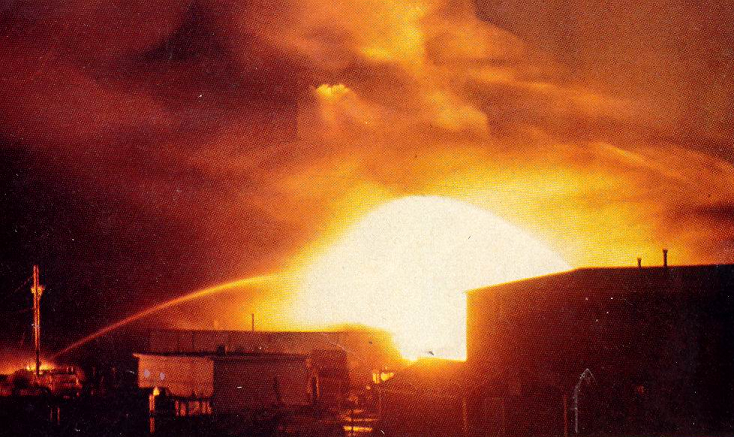 The courage of the firefighters is seldom documented in the accounts of the Mississauga Train Derailment, and bravery was certainly needed when firefighters learned they faced ongoing explosions of 90-ton propane cars and a chlorine leak that easily could have resembled a First World War chemical attack. Just as firefighters began realizing that the situation was highly volatile, they became increasingly aware that the situation could have been much worse than what they were experiencing. The suggestion that a miracle had occurred was in no way an exaggeration, and the first responders and the citizens of Mississauga were incredibly fortunate given the circumstances. 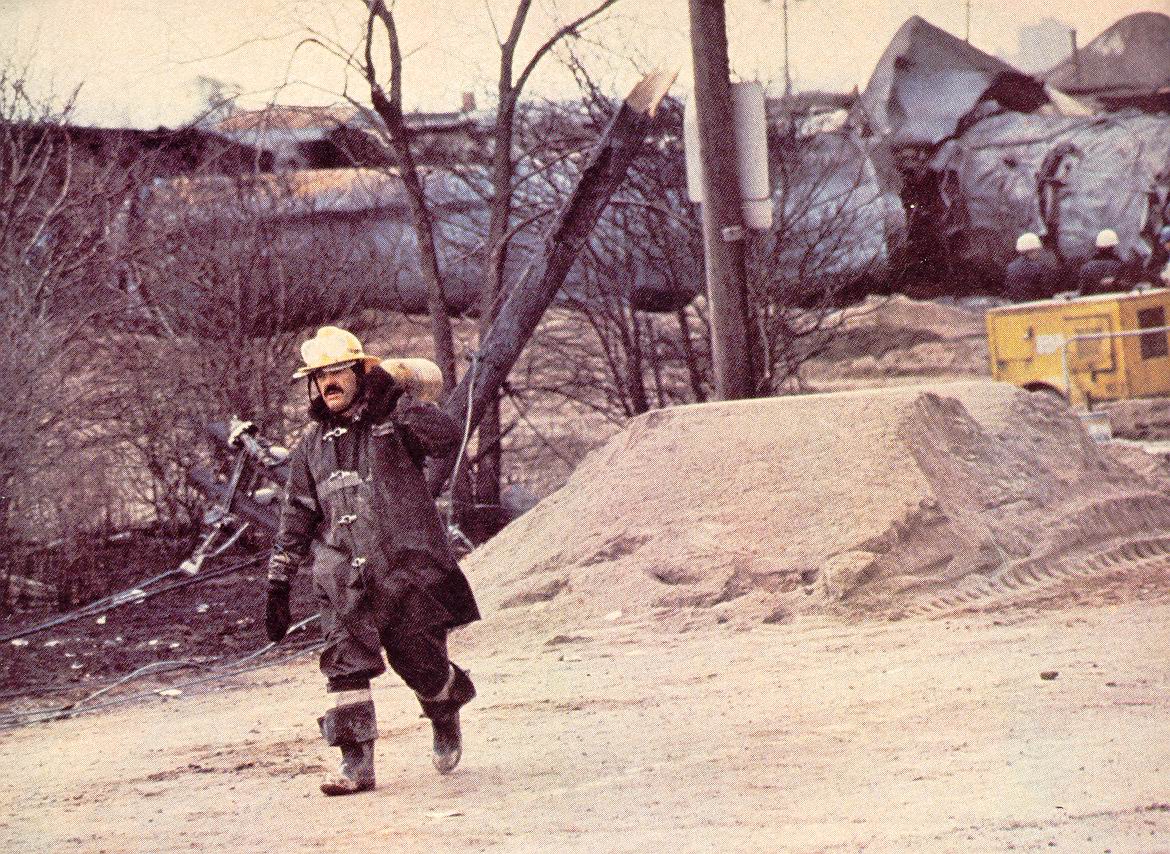 Personal interviews from firefighters reveal that many jumped out of their beds shortly after the first explosion at 11:53 pm and without being called, rushed to the scene in whatever gear was available to them. In one interesting case Deputy Fire Chief Art Warner left his son’s wedding and showed up to the scene still wearing a tuxedo and dress shoes. Upon arrival at the scene, firefighters who had initially perceived something along the lines of a plane crash or bombing quickly discovered that they had encountered a massive derailment that had completely blocked access across Mavis road. However, the location of the blockage was both a blessing and a curse, as the derailment being on Mavis made coordinating firefighting activities on both sides of the derailment site significantly harder, but it narrowly avoided a residential area to the East, and the Credit River to the West, two hazards that could have caused an environmental disaster or a deadly incident. 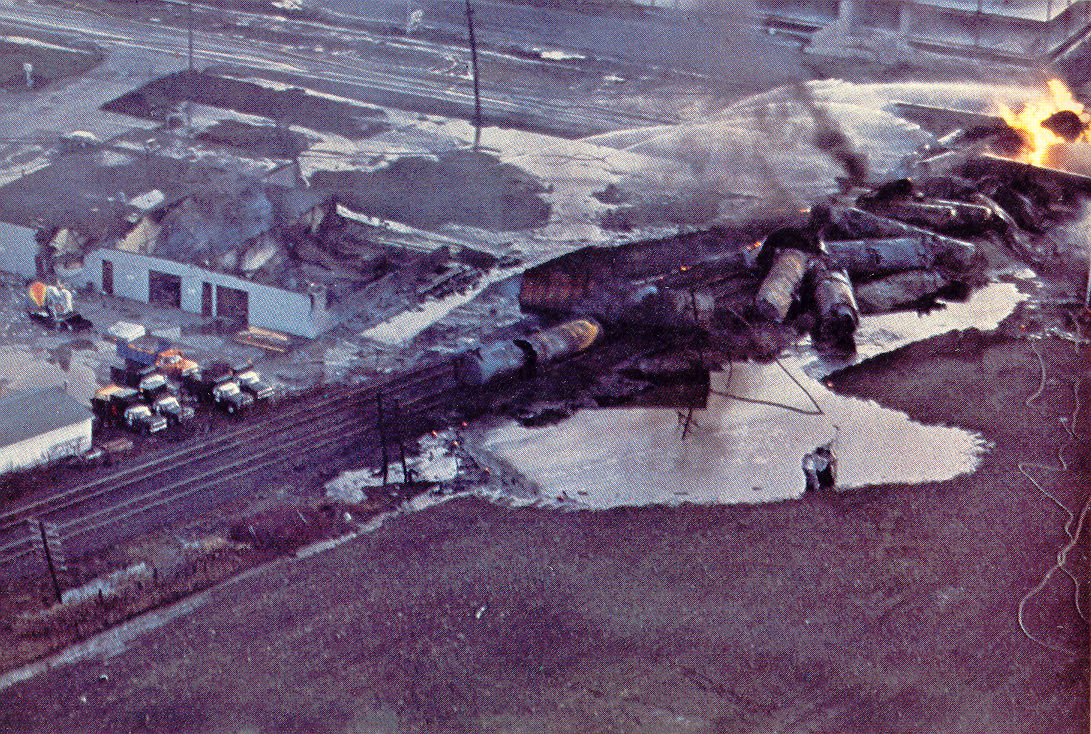 Hoses were quickly brought out to try to quench the flames as most fires required, but the petroleum propelled fire that was being continuously fueled and replenished far outmatched the 5000 gallons per minute water capacity of the hoses. Originally firefighters moved within 150 metres of the fire with the intent of putting it out, but as the fuel cars were heated by the flames, the boiled gas burst through the thin metal cars sending flames and metal raining down. Just prior to one of the first explosions, firefighters became aware that the propane tank was about to blow, and the firefighters who were still in close proximity were forcefully thrown to the ground by the force of the explosion.

The emergency responders quickly realized they needed to move themselves and their equipment back to a safer distance and surrender to the rampant flames and explosions of the derailment. Continuous explosions and the persistent fire meant that fixed hoses needed to be installed as the firefighters could not manually quench the fire without being at serious risk. Another explosion saw a massive explosion send a shard of metal crashing through multiple walls of an industrial building and impaled and enflamed a truck that had been parked behind the building with the purpose of avoiding damage from the explosions, and subsequently sent an unnerved civilian home who was inside the truck when the metal impacted. Another explosion saw a propane car burst high into the air and land 675 metres away from the derailment.

Although the 70s and 80s are known for the lack of environmental awareness by the general population, the firefighters on the scene of the derailment were well aware of the environmental danger of the chemicals on board the freight train. In addition to cooling the tanks and calming the fires with thousands of gallons of water and containing the deadly chlorine gas leak that forced the city-wide evacuation, the firefighters also fought to protect the environment including the nearby Credit River and Lake Ontario from the chemical runoff. Firefighters turned environmental protectors by throwing sand on chemical pools, foam sealing other chemical leaks, and sealing off sewage holes with sandbags and other means to protect the chemicals from tainting the water supply. 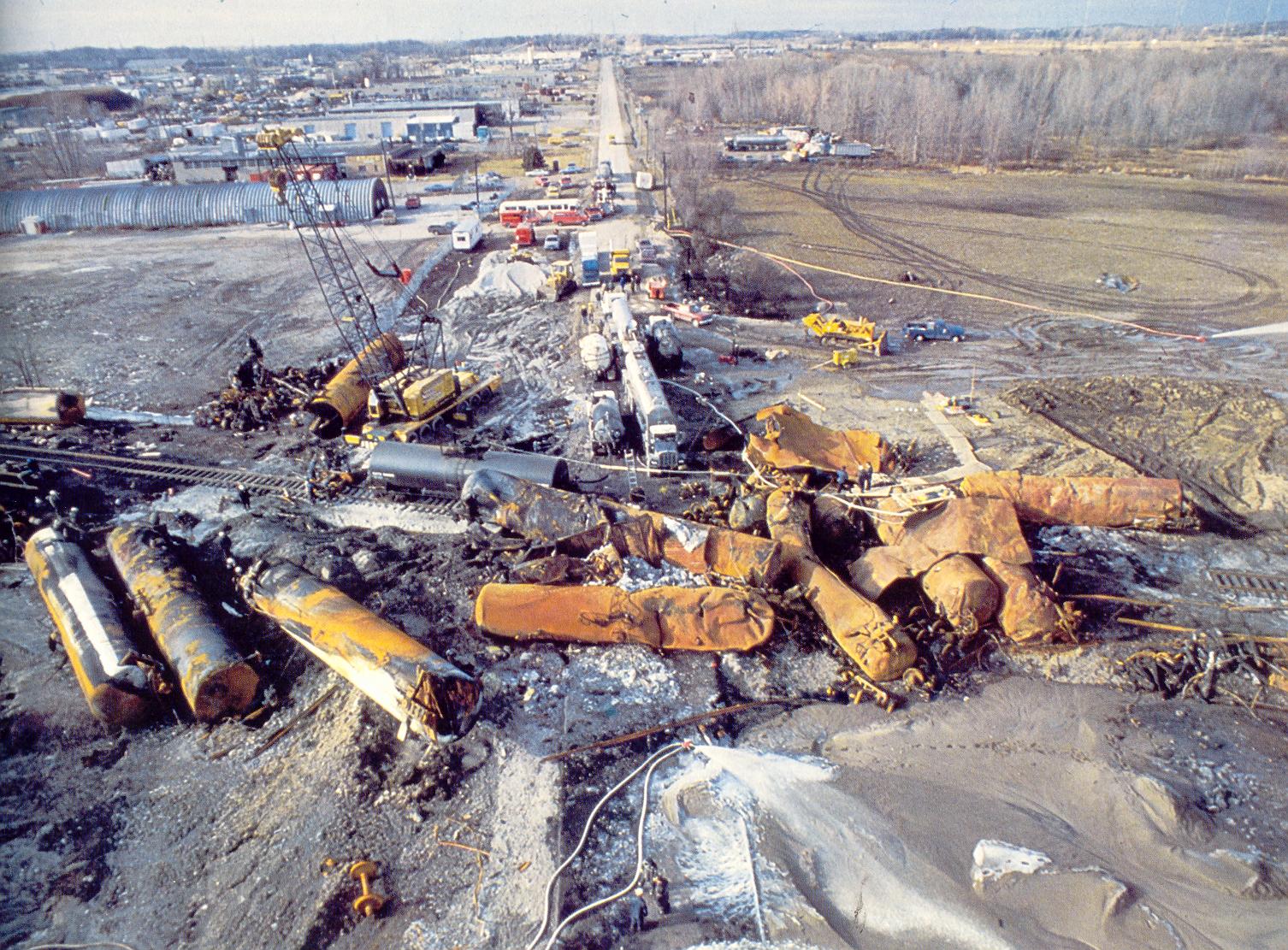 The actions of the Mississauga firefighters serve as an example to all, especially when considering that almost every action in response to the Derailment was improvised due to the evident lack of preparedness. In the aftermath, many improvements were made to the transportation of dangerous goods, and thanks to Mississauga, no city should face such a dangerous incident ever again at the hands of such a preventable accident. The 40th anniversary of the Derailment has recently passed and the firefighters of Mississauga will not be quickly forgotten as without their incredible heroism during the incident, November 10th, 1979 may well have gone down in history as a day of sorrow rather than a day of pride, and for that, the city of Mississauga is forever grateful.

To learn more about the Mississauga Train Derailment please visit Heritage Mississauga, or any of the articles listed below.