Mercury (Hg) is a contaminant of global importance, impacting the health of wildlife and humans around the world. The most toxic and readily bioaccumulated form of Hg is methylmercury (MeHg), which is produced via the methylation of inorganic Hg(II) in aquatic ecosystems. My research has focused on identifying the sources of MeHg to Arctic freshwater and marine ecosystems. To this end, I have quantified, in various environmental compartments, the formation (methylation) and removal (demethylation) processes that ultimately dictate how much MeHg is available for bioaccumulation. To measure MeHg production, I have used various approaches ranging in scale from whole ecosystem MeHg mass-balances of wetland ponds on the tundra landscape, to microcosm (bottle and sediment core) experiments using novel enriched Hg stable isotope tracer techniques. Using enriched Hg stable isotopes to measure the kinetics of Hg transformations, I was able to determine that the methylation of inorganic Hg in Arctic marine waters is the primary source of methylated Hg species to local marine foodwebs and that long range transport of MeHg by ocean currents was unlikely to contribute significantly to the MeHg burden in coastal marine waters (Lehnherr et al., Nature Geoscience, 2011). I have also used stable isotope techniques to experimentally develop a mechanistic understanding of MeHg photodemethylation, which was applied to model this process at the whole-lake scale (Lehnherr & St. Louis, Environmental Science and Technology, 2009). 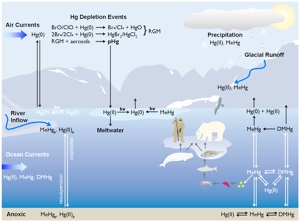 Being able to model integrated water column fluxes of MeHg photodemethylation was key in developing MeHg mass balance budgets for wetland ponds in the high Arctic. The results obtained from these mass-balances, which also incorporated atmospheric deposition, storage in the water column and bioaccumulation in zooplankton, showed that wetlands ponds on the Arctic landscape can be large producers of MeHg, similar in scale to boreal wetlands which are known to be significant sources of MeHg to downstream lake foodwebs (Lehnherr et al., Environmental Science & Technology, 2012a). Furthermore, methylation in these pond sediments is controlled by the availability of inorganic mercury (but surprisingly, not organic carbon or sulfate) and the activity of anaerobic bacteria such as methanogens, while MeHg concentrations in pond waters are controlled UV radiation through photodemethylation processes (Lehnherr et al., Environmental Science & Technology, 2012b).

Eutrophication is the world’s most widespread water quality problem, resulting in cyanobacteria blooms, oxygen depletion, release of cyanotoxins, fish kills and decreased quality of drinking water, all of which have important implications from a fisheries and lake management perspective. High phosphorus (P) concentrations have been identified as one of the key factors resulting in eutrophication of lakes, and as a result regulations and controls have been implemented in an effort to reduce P loading to freshwaters. However, there is still considerable debate as to whether nitrogen (N) should be similarly regulated as this nutrient may also play an important role in controlling algal biomass and lake eutrophication. This research was conducted at the world renowned Experimental Lakes Area as part of a whole-lake P fertilization experiment that has been on-going for 40+ years and my objective was to determine whether N is an ultimately limiting nutrient (on a seasonal time scale) for algal growth in eutrophied lakes and, therefore, whether costly treatment of waste water to remove N would be an efficient and effective means of managing lake eutrophication. To answer this question, the research team examined key processes in the cycle of N and P nutrients, including fixation of atmospheric N2, atmospheric N deposition, sedimentation of N and P, and recycling of organic matter in the sediments to release nutrients back into the overlying waters. Preliminary findings suggest that although the lake is fertilized with only P and not N, primary production is not ultimately limited by N, as N nutrients are supplied through a combination of N2 fixation (the single most important source of N), and return from the epilimnetic and hypolimnetic sediments (together equal to ~1/3 of all N sources).

Arctic wetlands, ponds and lakes are common features on the Arctic landscape, providing valuable resources to wildlife and humans. These systems also act as biogeochemical hotspots, and can be very productive. Rates of ecosystem productivity dictate how much energy flows through foodwebs, impacting the abundance of higher-level organisms (e.g., fish), as well as  he net carbon balance, controlling whether a particular system is carbon source or sink. This research strives to obtain a process-level understanding of ecosystem productivity and respiration, in order to better understand how climate-induced changes in hydrology (change in precipitation patterns, timing of ice-out and snowmelt, deepening of the active layer overlaying permafrost, etc.) and catchment vegetation (increased vegetation cover, shifts in plant community structure) are impacting carbon  cycling dynamics and Arctic freshwaters ecosystems on both the short and long-term. I am using various tools and approaches to examine carbon cycling in Arctic ponds and lakes,including novel stable isotope techniques to examine  current rates of primary production and respiration, sediment cores and paleolimnologicaltechniques to examine the response of productivity and lake ecosystems to climate change as well as current ecosystem scale fluxes of greenhouse gases across the air-water interface to determine whether these systems are sources or sinks of CO2, CH4, N2O, etc. 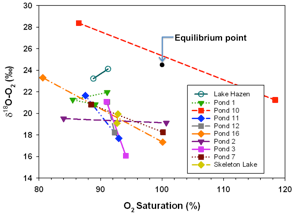