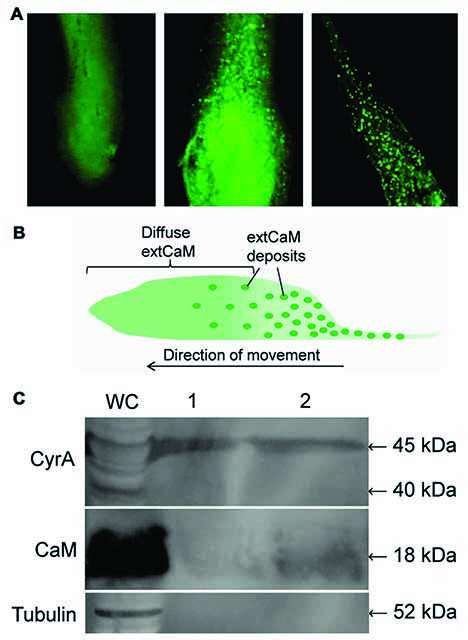 Figure. Detection of CyrA and CaM in the slime sheath. (A) Immunolocalization of DdCaM in AX3 pseudoplasmodium anterior (left panel), middle (center) and posterior sections (right). (B) Illustration of extCaM localization in pseudoplasmodium. (C) Presence of CyrA and CaM in isolated slime sheath deposited by WS380B slugs as shown via western blotting. Western blots probed with anti-C-CyrA, anti-CaM, or anti-tubulin.

The extracellular matrix (ECM) is a dynamic complex of glycoproteins, proteoglycans, carbohydrates, and collagen that serves as an interface between cells and their extracellular environment. Essential for normal cellular homeostasis, physiology, and development, it is also a key functionary in human diseases including cancer. The social amoebozoan Dictyostelium discoideum secretes an ECM during multicellular development that regulates aspects of multicellularity, cell motility, cell differentiation, and morphogenesis. It also provides structural support and protective layers to the resulting differentiated cell types. Proteolytic processing within the Dictyostelium ECM generates specific bioactive factors that regulate cell motility and differentiation. Dictyostelium ECM shares many features with mammalian and plant ECM, and thus presents an excellent system for studying the structure and function of the ECM. As a genetically tractable model organism, Dictyostelium offers the potential to further elucidate ECM functions, and to possibly reveal previously unknown roles for the ECM. 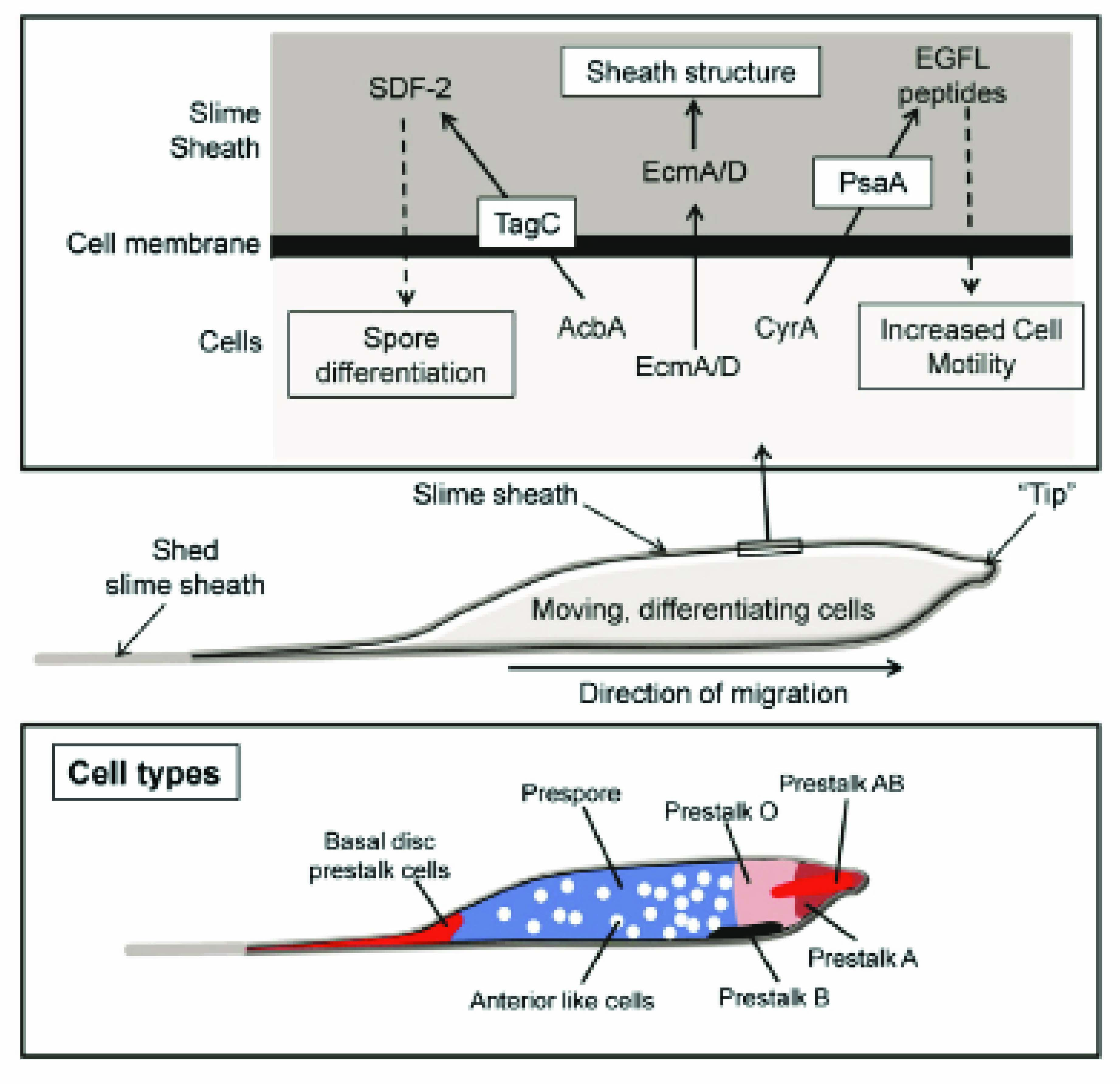 Figure. The ECM surrounding the multicellular slug and the cell types contained within. The sheath ECM, which is synthesized from the tip of the multicellular slug, is shed from the back of the slug as it migrates along the substratum. (Top panel) a diversity of processes occur in the ECM during slug migration. Cells secrete EcmA and EcmD which provide structure to the ECM. Secreted proteins such as AcbA and CyrA are processed into bioactive fragments that in turn bind to the cell surface to modulate cellular processes (e.g., spore differentiation and cell motility, respectively). (Bottom panel) different cell types within the slug sort to specific locations. 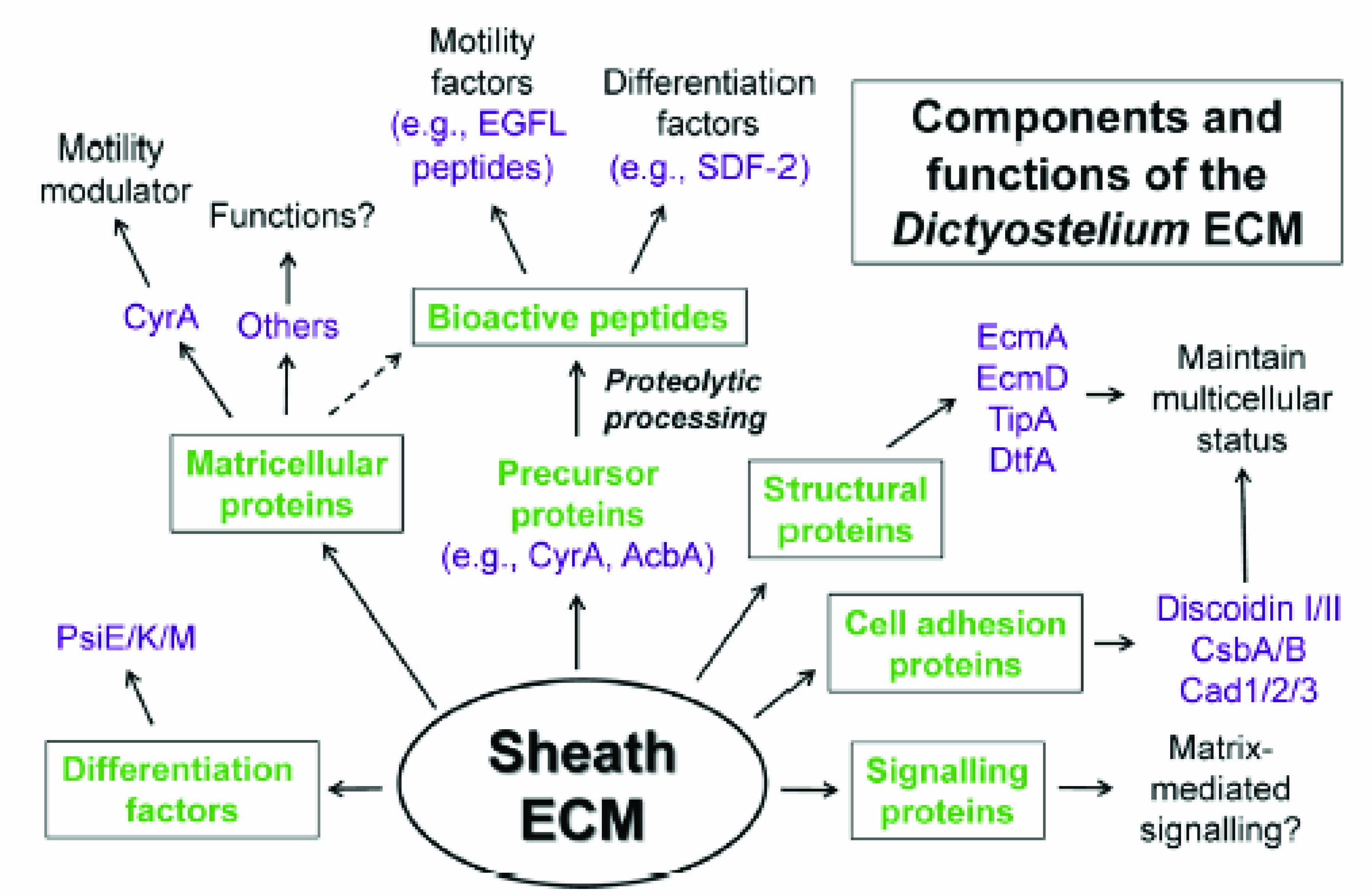 Figure. Summary of the known components and events mediated by the sheath ECM of Dictyostelium. Like mammals, during multicellular development, Dictyostelium cells release precursor proteins that are proteolytically processed to release bioactive peptides that regulate cell motility and differentiation. Matricellular proteins have been identified that regulate cell motility. Structural and cell adhesion proteins maintain the multicellular status of the aggregate, while the functional roles of the many signalling proteins remain to be analyzed. Based on research in mammals, matricellular proteins could function to mediate these signalling events. Other known roles of mammalian ECM proteins (e.g., morphogenetic functions) have so far not been sufficiently analyzed in Dictyostelium.

Ina Nikolaeva, Robert J. Huber and Danton H. O’Day, 2012. EGF-like peptide of Dictyostelium discoideum is not a chemoattractant but it does restore folate-mediated chemotaxis in the presence of signal transduction inhibitors.  Peptides 34: 145-149