One of the most difficult mechanisms to understand during embryonic development is how pattern and polarity are established and maintained. What defines left-right, dorsal-ventral and head-tail in a developing organism. Insight into the genes involved has grown but still the importance of diffusible and other gradients and causes remain to be learned. Dictyostelium presents a unique system since during development single cells aggregate to form a multicellular pseudoplasmodium, called a slug, which has an anterior-posterior polarity within which fundamentally only two types of cells develop: stalk cells and spore cells. The migrating slug forms a distinct tip that secretes cyclic AMP and experimental evidence suggested this was the control center for pattern a polarity. However other research suggested the tip wasn’t a critical developmental “organizer”. 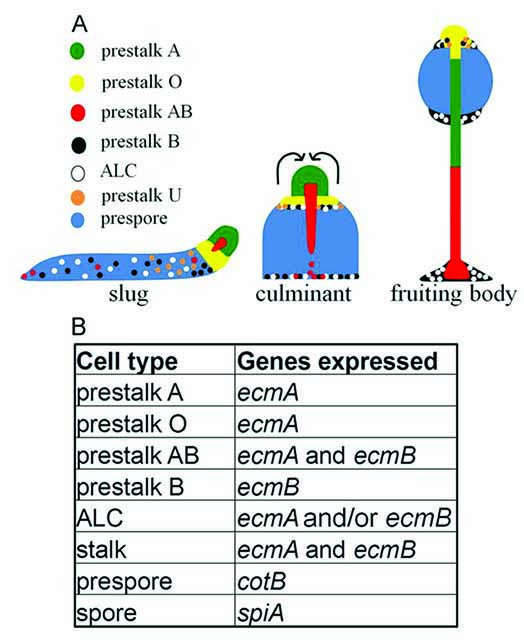 When amoebae of Polysphondylium pallidum WS320 are placed in non-nutrient buffer in roller tube culture they form spherical or ellipsoidal aggregates with no evident “tip”. At first the aggregates demonstrate a "loose" morphology but by 12 h, with the formation of a cellulose-containing, peripheral sheath, they become "tight" aggregates. At this time stalk differentiation begins. Using various methods for the resolution of prespore (ultrastructure, spore antigen immunofluorescence, periodic acid - Schiff staining) and prestalk (ultrastructure, alkaline phosphatase histochemistry, neutral red staining, Calcofluor fluorescence) cell localization, the pattern of cell differentiation in submerged aggregates was shown to be essentially identical to that of normal pseudoplasmodia. Furthermore, using a cAMP bioassay it was revealed that the submerged aggregates, while devoid of a morphological tip, do possess a biochemical tip which is correlated with sites of neutral red staining and stalk cell differentiation. As a result of these studies, an earlier argument that the tip of the pseudoplasmodium is not essential for the establishment of pattern or in the "organization" of cellular differentiation during slime mould development was contradicted.

Earlier, we had found that colchicine--a microtubule disrupting drug that reverses polarity during development of many different species—caused slugs to stop moving, to break up into smaller tipped masses and to generate stalk cells at the rear rather than the front. What’s more in the continuous presence of colchicine, essentially all of the cells were reprogrammed as stalk cells. In short the drug affected the pattern of cell differentiation while not affecting the polarity (the front tip of he cell masses was retained). Figure. The effect of colchicine (005 M) on the morphology of D. discoideum pseudoplasmodia.

Pseudoplasmodia from growth plates (A) were placed on water agar containing colchicine as described in the Methods and Materials. The progressive gross morphological changes in slug structure were examined by light (transmitted) microscopy at 2 h (B), 20-24 h (C, D), 4 days (F) and 7 days (G). Phase microscopy of squashes of the cell masses showed stalk cells in basal material (E) at 20 h and in all parts of cell mounds (H) at 7 days.

Colchicine is shown to have several effects on the development of the pseudoplasmodia of the cellular slime mould Dictyostelium discoideum. At concentrations of 001 M and above culmination was prevented, while differentiation of cells into stalk cells occurred at the rear of cell masses. Essentially all cells transformed into stalk cells when slugs were left on colchicine agar for a long time. At concentrations of 001 M normal slug architecture was maintained while above 0025 M pseudoplasmodia reorganized into multiple mounds. Each of these mounds developed an apparently normal discrete tip which was devoid of prespore cells as shown by immunofluorescent staining. The same effects were observed in growing cultures and in regulating slugs treated with colchicine. The data are consistent with the ideas that microtubules are involved in the maintenance of slug architecture and in the differentiation of stalk cells. In spite of this insight, the mechanism by which colchicine worked remained a mystery since other microtubule-disrupting drugs had no effect on development. Yekaterina Poloz found out why.

The importance of calcium and calmodulin signalling in ecmB gene expression and stalk cell differentiation during normal development and slug regeneration was further validated in other work by Poloz and O’Day (2012).

Paterno, G. D. and D. H. O'Day,1981. Cellular differentiation and pattern formation in the absence of morphogenesis in the cellular slime mould Polysphondylium pallidum: evidence for a biochemical tip (organizer) in submerged aggregates. Can. J. Microbiol. 27: 924-936.